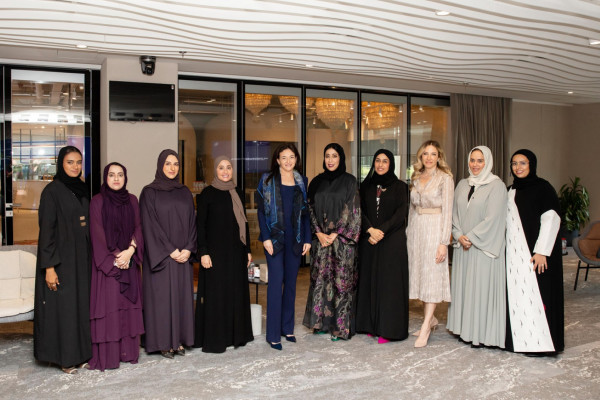 The meeting commenced with Mona Al Marri welcoming Sheryl Sandberg, who is visiting the region for the first time, and praising her extensive efforts in supporting women’s leadership around the world, saying, “Sheryl was excited to meet Emirati women leaders and get to know their experience in supporting women, and we congratulate Meta for opening its regional headquarters in Dubai Internet City.”

She highlighted that gender balance, equal opportunities and easy access to services were some of the main principles on which the UAE was founded, and the UAE Gender Balance Council was established in 2015 to further enhance this process and accelerate its achievements in this field.

These efforts have been realised, and the UAE has been leading the region in competitiveness indicators and relevant global reports over the past years, most recently in the ‘Women, Business and the Law’ 2021 report issued by the World Bank, achieving a full mark (100 points) across five areas: freedom of mobility, work, wages, entrepreneurship, and pension. Other notable achievements include the UAE leading the region and climbing to eighteenth place globally in gender equality in a report issued by the United Nations Development Programme in 2020. These achievements are the result of the unlimited support provided by the wise leadership and H.H. Sheikha Fatima bint Mubarak, Chairwoman of the General Women’s Union (GWU), President of the Supreme Council for Motherhood and Childhood, and Supreme Chairwoman of the Family Development Foundation (FDF), for gender balance, as well as the extensive efforts led by H.H. Sheikha Manal bint Mohammed bin Rashid Al Maktoum, President of the UAE Gender Balance Council, which have contributed to considerable progress both at home and abroad.

Mona Al Marri added that Emirati women have made tangible achievements in leadership positions across various fields; including space, AI, advanced technology, innovation and future sectors, and have influential contributions to various paths of social and economic development.

Ohood Al Roumi and Hessa Buhumaid commended the great efforts of H.H. Sheikha Manal bint Mohammed in regard to gender balance, which led to considerable progress in the UAE and enhanced the country’s position globally, stressing that this subject is a priority in the country’s future strategies, and translates the vision and directives of the UAE’s wise leadership.

Sheryl Sandberg praised the UAE’s efforts in supporting women and its advanced global position in gender balance matters, adding that it is one of the most inspiring and globally acclaimed experiences in benefitting from women’s capabilities to achieve significant sustainable development at all levels, saying, “We are delighted that Emirati women have assumed some of the most prestigious positions and have achieved success across fields including technology and artificial intelligence.”

She added, “I am pleased today to meet with ministers and women leaders and exchange visions and ideas on what women can achieve in light of the increasing global trend towards relying on artificial intelligence and the virtual world, which is what Meta is currently focusing on through its various applications. We are also pleased that Meta and the UAE Gender Balance Council share the same vision in supporting inclusive societies and sustainable development goals, and we deeply appreciate the efforts of the council, led by H.H. Sheikha Manal bint Mohammed bin Rashid Al Maktoum, to support women and gender balance globally.”

Two areas for skills and professionals in the forests of Mushrif Park...