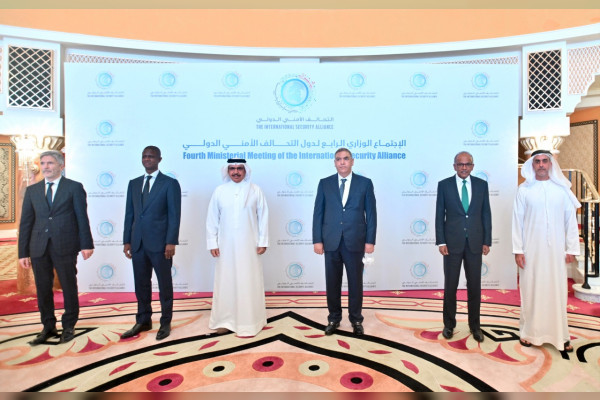 The Netherlands also joined the alliance, which has its General Secretariat hosted by the UAE Ministry of Interior.

Sheikh Saif conveyed the greetings of the UAE leadership, government and people to the meeting held as part of the work process and objectives of ISA in promoting joint international action in protecting societies, security and stability and combating crime in all its forms. He also welcomed the Netherlands to the Alliance and described its move as a great addition to this joint integrated action.

The ministers listened to a briefing on the developments of the work of ISA committees and the results of the last exercise (ISALEX 2.0), the first of its kind in the world to be held on the Metaverse.

A number of future projects and initiatives were adopted, aiming to enhance the security and safety of the member states, unify security and police concepts and joint coordination of mutual expertise about security and crimes.

The meeting issued the statement of the fourth ministerial meeting, in which, attendees stressed that the member states of the Alliance are continuing to step up their efforts to confront organised and transnational crimes and to combat extremism and radicalism in all its forms.

They also indicated that ISA, established in 2017 as an act of solidarity among member states, continues its endeavours to achieve more peace, security and stability in the societies of the member states and all communities around the world.

The statement added, “Our alliance, which was created in 2017 as an act of solidarity between friendly and brotherly countries, continues its quest to achieve greater peace, security and stability in the societies of member states and the international community as a whole.”

“We discussed the security challenges faced by some of the member states of the International Security Alliance over the past year. We also strongly condemn the terrorist missile attack that hit the UAE earlier this year.

“We remain committed to a serious and positive partnership, and we will continue to stand and work together, based on unity, common purpose and an enduring commitment to peace.”

The statement concluded by saying, “We welcome the addition of the Kingdom of Netherlands to the alliance and look forward to what they will bring in terms of practical and safe experiences that will raise the level of coordination between international work teams and strengthen the exchange of police expertise, in particular by increasing the capacities of the ministries of the interior of the Alliance member states.”