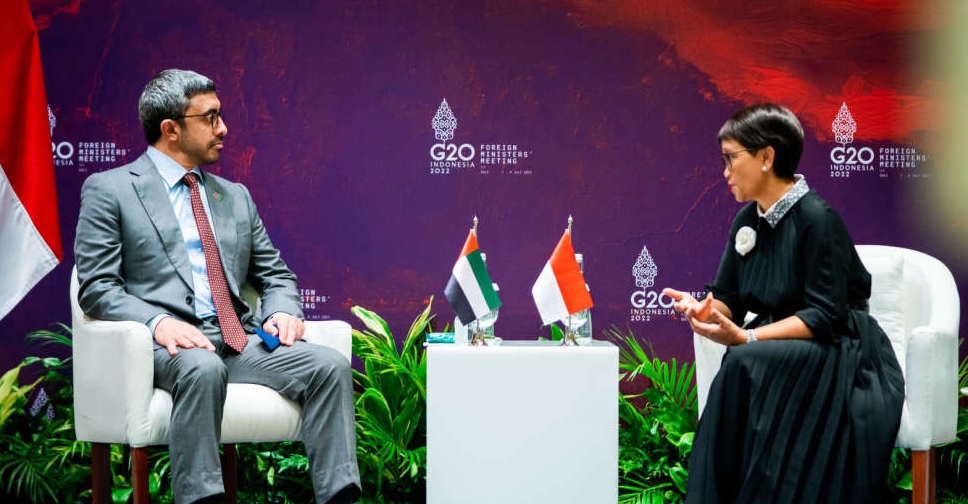 H.H. Sheikh Abdullah bin Zayed Al Nahyan, Minister of Foreign Affairs and International Cooperation, met with Retno Marsudi, Minister for Foreign Affairs of Indonesia, on the sidelines of the meetings of G20 ministers of foreign affairs held in Indonesia.

During the meeting, the two sides discussed ties between the UAE and Indonesia and ways of enhancing their cooperation.

Sheikh Abdullah said the UAE, under the leadership of President His Highness Sheikh Mohamed bin Zayed Al Nahyan, is committed to international efforts to support the process of sustainable development, which will guarantee international stability and prosperity. He applauded the vision of Joko Widodo, President of Indonesia, that reflects the joint will of the two countries to develop their strategic relations.

He said the President lauds the Indonesian President’s visit to the UAE as part of the constructive cooperation to promote overall development and ensure opportunities of growth and prosperity for both countries.

The UAE and Indonesia enjoy deep-rooted strategic ties, which are witnessing overall development supported by their leaderships, and were recently crowned by the signing of a comprehensive economic partnership agreement (CEPA) between the two countries in Abu Dhabi.

Marsudi welcomed Sheikh Abdullah and stressed Indonesia’s keenness to enhance its cooperation with the UAE in various fields, highlighting the UAE’s pioneering stature regionally and internationally.

The two countries continue to cooperate closely by working together on a wide range of strategic projects, as the UAE has pledged $10 billion to the Indonesian Investment Authority, in addition to accelerating the pace of investment projects in sectors of shared priority such as agriculture, energy, infrastructure and logistics in parallel with encouraging future cooperation in the tourism, entrepreneurship and health care domains.

Abdullah Salem Obeid Al Dhaheri, Ambassador of the UAE to the Republic of Indonesia attended the meeting.

UAE: 3,000 beneficiaries of housing loans will be announced this year