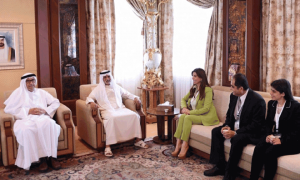 Sheikh Nahyan bin Mubarak Al Nahyan, UAE Minister of Tolerance and Coexistence, met today with a group of distinguished students at the Faculty of Mass Communication at Damascus University who are visiting the United Arab Emirates as part of the initiative (Supporting Distinguished Arab Youth in the Field of Media).

During the meeting, Sheikh Al Nahyan praised the efforts of the Syrian media, Dr. Amal Melhem, to launch this initiative from Syria, specifically from Damascus University, and listened to her to explain the details of the initiative, giving some advice to media students.

In turn, Melhem described the meeting as distinguished, noting the humanitarian initiatives of Sheikh Al Nahyan, pointing out that her current initiative is an extension of his initiatives and a reflection of his giving in the field of media.

There is currently in the United Arab Emirates a group of distinguished students from the Faculty of Media at the University of Damascus within the initiative (Supporting Distinguished Arab Youth in the Field of Media) launched by Dr. Melhem through her company “AM Media” starting from Syria with the aim of encouraging creativity among young media professionals and increasing their experience and informing them On other media schools and the latest technologies used in this field.