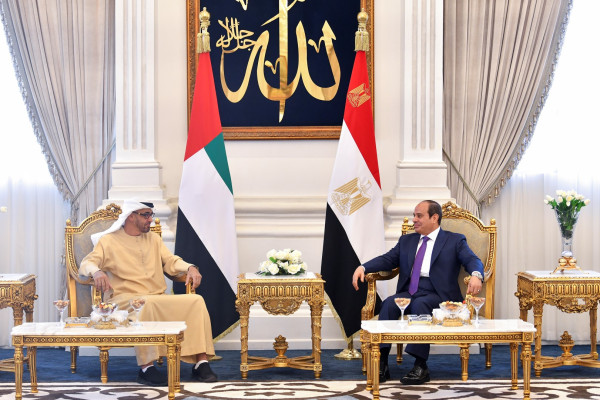 While welcoming President His Highness Sheikh Mohamed at the VIP lounge at the airport, the Egyptian President exchanged cordial talks with the UAE President, which reflect the strong fraternal ties between the two countries and their peoples.

The two leaders also discussed cooperation and the many promising opportunities to expand the horizons to broader levels that would enhance the strategic partnership between the two countries, especially in the economic and development fields that support their aspirations towards achieving sustainable development, progress and prosperity for their two brotherly peoples.

They also exchanged views regarding several issues and dossiers of mutual interest and the latest regional and global developments.

In this context, they also emphasised the necessity of resorting to dialogue, understanding and diplomatic methods to settle disputes and crises by peaceful means that maintain international peace and security.

The meeting also touched on the significance of enhancing joint Arab action and unity in facing the challenges witnessed by the Arab region.

They also affirmed their support for all efforts to reach a permanent solution to crises in the region’s countries that contribute to boosting the foundations of security and stability in them and achieving prosperity and peace for their peoples.