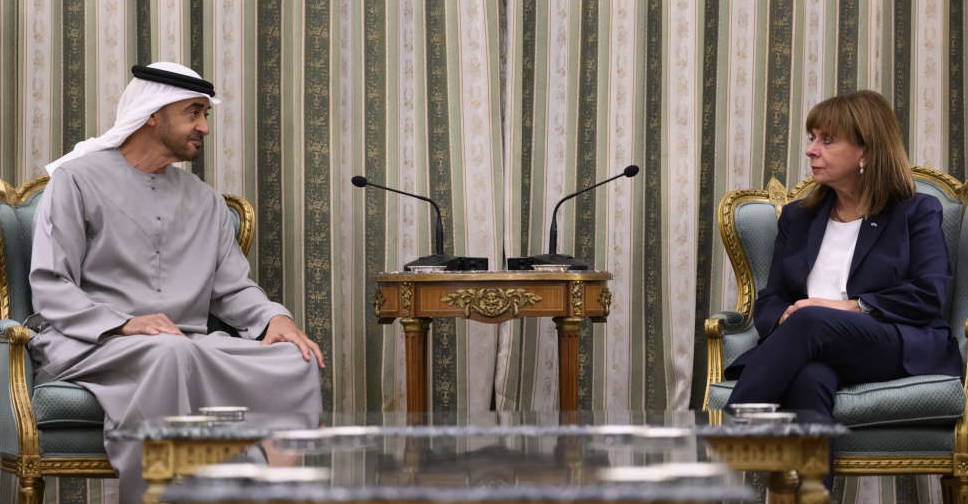 Following the meetings in Athens, Sheikh Mohamed said the UAE is committed to strengthening strategic relations and economic ties with its key partners.

He expressed happiness over the progress in the relations between the two countries in recent years, highlighting a 17 per cent increase in trade exchange, despite the challenges of the COVID-19 pandemic.

Greek President Sakellaropoulou welcomed Sheikh Mohamed at the presidential palace and congratulated him on becoming the President of the United Arab Emirates.

Greece considers the UAE as its strategic partner, Sakellaropoulou said, adding that both countries share the same vision towards peace, security and prosperity in the region.

Today I arrived in the ancient city of Athens and was pleased to meet President Katerina Sakellaropoulou, Prime Minister Kyriakos Mitsotakis and members of the Greek government. The UAE is committed to strengthening strategic relations and economic ties with our key partners. pic.twitter.com/FIZubu20p0

The meeting between Sheikh Mohamed and Greek PM Mitsotakis was held at the headquarters of the Greek Ministerial Council in Athens.

The two leaders discussed opportunities for boosting collaboration, most notably in areas of economy, investment, development and environment, as well as in renewable energy and food security.

They exchanged views on the latest regional and international developments of mutual concern, stressing their common views toward forging peaceful solutions to the region’s conflicts and the need to strengthen international security and stability.

Sheikh Mohamed thanked Mitsotakis for inviting the UAE to participate as Guest of Honour in the 86th edition of the annual Thessaloniki International Fair (TIF), slated for September 10-18.

The UAE is the first Arab country to be invited to participate as a guest of honour in the event, which is said to be the oldest international trade fair, dating back to 1926.

His Highness said the UAE will participate in the event with a delegation of over 40 entities representing the public and private sectors, underscoring the deeply rooted ties between the two countries.

During the meeting, Sheikh Mohamed also invited Mitsotakis to attend the 28th session of the Conference of the Parties (COP28) to the United Nations Framework Convention on Climate Change (UNFCCC), which will be held in the UAE in 2023.

Their discussions also focused on the latest developments in the €4 billion joint investment fund announced by the two countries during Mitsotakis’ visit to the UAE in May 2022, in addition to the outcome of the UAE-Greece Business Forum attended by over 50 Greek entities representing the public and private sectors, along with over 20 leading Emirati companies.

Mitsotakis hosted a luncheon banquet in honour of Sheikh Mohamed.