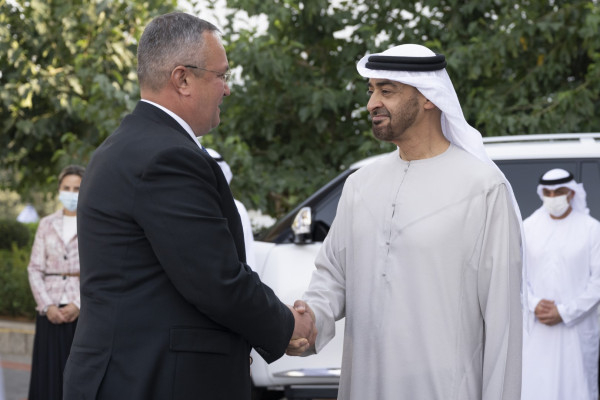 His Highness Sheikh Mohamed bin Zayed welcomed the Romanian Prime Minister and his accompanying delegation, expressing his hope that the visit will further boost their bilateral relations in various fields.

The UAE President and Ciucă explored the prospects for enhancing and expanding their cooperation across various vital sectors, especially in investment, trade, development and agriculture.

They also exchanged views on the latest developments related to regional and global issues of mutual concern.

The Romanian Prime Minister offered condolences to the UAE President over the passing of Sheikh Khalifa bin Zayed Al Nahyan.

He also congratulated Sheikh Mohamed on his appointment as President of the UAE, wishing him success in leading the country to achieve further progress to meet the aspirations of its people.

The UAE President thanked Ciucă for his sincere feelings, and expressed his wishes of more development and prosperity for Romania.