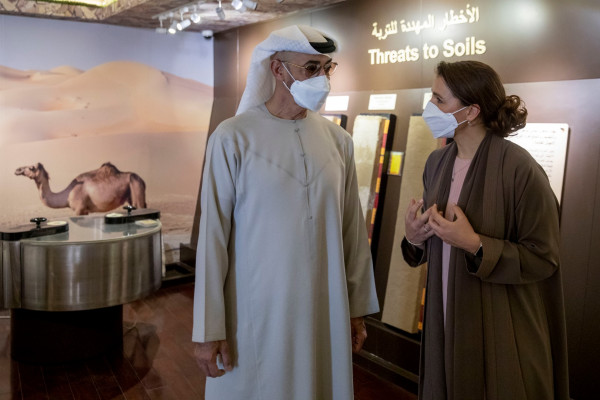 DUBAI, 5th June, 2022 (WAM) — As part of his field tours in various emirates, President His Highness Sheikh Mohamed bin Zayed Al Nahyan has visited the International Centre for Biosaline Agriculture (ICBA) in Dubai, which specialises in agricultural research aimed at enhancing agricultural productivity and sustainability in saline and marginal environments.

Upon his arrival, His Highness Sheikh Mohamed bin Zayed was received by Mariam bint Mohammed Almheiri, Minister of Climate Change and the Environment; Razan Al Mubarak, Managing Director of the Environment Agency-Abu Dhabi (EAD), President of the International Union for Conservation of Nature (IUCN) and Chair of ICBA’s Board of Directors; Dr. Tarifa Al Zaabi, Deputy Director-General at ICBA, and a number of officials from the centre.

At the beginning of his tour, the UAE President planted a Ghaf tree, which is known for its ability to withstand difficult climatic and environmental conditions and has acquired a special symbolism in the history and identity of the UAE.

His Highness Sheikh Mohamed’s tour included the outdoor area, which includes various trees that were especially planted and on which experiments were carried out, especially plants that tolerate salinity. The tour also included the Desert Life Sciences Laboratory, the Genebank and the Emirates Soil Museum.

Sheikh Mohamed bin Zayed listened to an explanation from ICBA officials about their most important achievements, national, regional and international partnerships and fields of work, in addition to their future research plans. The officials detailed the plans that include research on sustainable management of natural resources, irrigation efficiency, remote sensing, climate-adapted crops and genome research for healthier crops, among others.

The UAE President praised the efforts of the centre’s staff and the important role ICBA plays in one of the most important areas related to development in the UAE and the world – agriculture and water.

His Highness stressed that ICBA embodies the UAE’s leading role in working to achieve sustainable development at the regional and global levels, by investing knowledge, innovation and scientific research in finding solutions to the challenges facing biosaline agriculture and soil problems. It is also innovating modern methods to optimally use water for agriculture, and developing agricultural strains capable of adapting under difficult environmental and climatic conditions.

Sheikh Mohamed bin Zayed said the UAE accords food security great priority in its development plans. Thus, it is interested in agriculture and the use of the latest scientific and technological methods to advance agriculture and increase productivity. He said the ICBA’s work confirmed the UAE’s belief that science was the main way to tackle challenges facing humanity in various areas, especially agriculture and water.

At the end of his tour, His Highness Sheikh Mohamed bin Zayed Al Nahyan expressed his best wishes to the centre’s staff and management, and urged them to continue supplementing national agriculture, food security and water plans with more important ideas and innovations.

For her part, Mariam Almheiri said that the visit of His Highness Sheikh Mohamed to ICBA “reflects the extent of care, attention and support given by our wise leadership to the research, development and innovation system, and the extent of what this system represents. It serves as a strategic pillar to achieve our country’s goals in creating a better future for current and future generations”.

She pointed out that the Ministry of Climate Change and Environment, in cooperation with ICBA and other strategic partners in the public and private sectors, is keen to strengthen research, development and innovation capabilities to stimulate the pace of climate action, and to explore new solutions that help enhance food security.

Almheiri commended the efforts made by ICBA to support and enhance continued and effective research and development.

Razan Al Mubarak, said, “More than ever and in the context of climate-change there is a need to invest in research to develop innovative, low capital, and replicable food production systems and plants that do not rely on intensive energy use and are adapted to degraded soils. Under the direction of President His Highness Sheikh Mohamed bin Zayed Al Nahyan, ICBA will continue to develop agricultural techniques that contribute to food security.”

For her part, Dr. Tarifa Al Zaabi said, “We are deeply honoured to welcome His Highness Sheikh Mohamed bin Zayed Al Nahyan at ICBA. And we are profoundly grateful to the Government of the UAE for the tremendous support provided to our centre for over two decades. This was a great opportunity to present to His Highness the best biosaline agriculture practices that were developed by the scientists and demonstrated to more than 30,000 farmers. The visit by His Highness Sheikh Mohamed bin Zayed Al Nahyan underscores special attention given by the Government of the UAE to scientific research and development in the field of agriculture.”

The ICBA staff expressed their happiness at the UAE President’s visit and said that this gave them fresh impetus for putting in more hard work in future.

Over the years, ICBA has established itself as a global centre of excellence and a go-to research-for-development partner in different regions. It focuses on developing tailor-made solutions for marginal environments and has partners in more than 50 countries, enabling it to leverage a vast and diverse pool of expertise to achieve a greater impact on the ground.

The centre has carried out research-for-development activities and programmes in some 40 countries in Central Asia, the Middle East, North Africa, South Asia, the South Caucasus, and sub-Saharan Africa.

The centre has also developed and introduced 24 technologies and crops in around 30 countries. They range from improved genotypes of quinoa and Salicornia to drought monitoring solutions. Under its plant genetic resources programme, ICBA has distributed nearly 9,000 seed samples to scientists, farmers and other stakeholders in 57 countries.