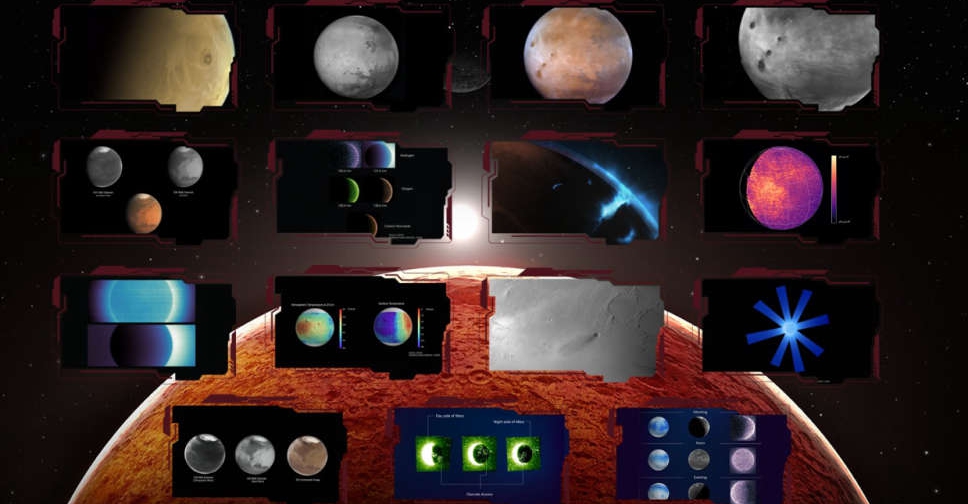 The Emirates Mars Mission (EMM) has released the second tranche of scientific observations collected by the Hope Probe.

Over 76 GB of raw data has been uploaded to the mission’s data centre to help scientists, researchers, and space enthusiasts better understand the Martian atmosphere.

The information, images and insights were collected by the Probe’s state-of-the-art scientific equipment between May 23 and August 31.

They represent the core result of the scientific mission to explore the climate and atmosphere on Mars.

This is part of the EMM’s commitment to publish data collected by Hope every three months.

It included unique images of Mars showing vast structures at a range of wavelengths suggesting a higher-than-expected variation in atomic oxygen density and pointing to unusual levels of atmospheric turbulence.

The observations also confounded the scientists’ perceptions on the distribution of ultraviolet light emitted from the upper atmosphere of the Red Planet.

We have already seen startling new observations from Hope and look forward to deriving important new insights into Mars’ atmospheric dynamics and sharing them with the world,” said Omran Sharaf, Project Director of the Emirates Mars Mission.

Hessa Al Matroushi, Deputy Programme Manager and Science Lead of EMM, said that the second batch of scientific data included important and unprecedented information that will help the global scientific community develop more accurate scientific models of the atmosphere on the Red Planet, and contribute to a deeper understanding of its changes.

The Hope Probe is carrying three state-of-the-art instruments: the Emirates Exploration Imager (EXI) camera to capture high-resolution, digital coloured images of the Red Planet to measure ice and stratospheric ozone in the lower atmosphere; the Emirates Mars Infrared Spectrometer (EMIRS) to measure temperature and the distribution of dust, water vapour and ice clouds; and the Emirates Mars Ultraviolet Spectrometer (EMUS) to study oxygen and carbon monoxide levels in the planet’s thermal layer, as well as the presence of hydrogen and oxygen in the upper atmosphere.

The Hope Probe will continue its planned elliptical scientific orbit around Mars, which ranges between 20,000 and 43,000 km with a 25-degree inclination toward Mars, giving it the unique ability to complete one orbit around the planet every 55 hours capturing comprehensive observations of the planet every nine days.

The project is a culmination of knowledge transfer and development efforts that started in 2006, which has led to Emirati engineers working with scientific partners from across the globe to develop the design of satellites and their manufacturing and engineering capabilities.

The Hope Probe weighs around 1,350kg, the size of a small car, and was designed and developed by the engineers at Mohammed Bin Rashid Space Centre (MBRSC), in collaboration with its academic partners, including the Laboratory for Atmospheric and Space Physics at the University of Colorado Boulder, Arizona State University, and the University of California, Berkeley.