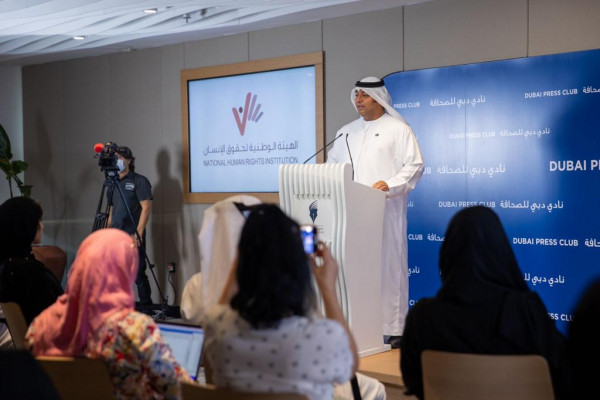 DUBAI, 9th May, 2022 (WAM) — The National Human Rights Institution (NHRI) in the UAE today announced the completion of its 100-day plan launched to accelerate the setting up of its operations.

During its third media briefing held at the Dubai Press Club, the Chairperson of the National Human Rights Institution Maqsoud Kruse, provided an overview of the accomplishments of the 100-day plan and shared the outcomes of the fourth meeting of NHRI’s Board of Trustees held on 21 April, 2022.

The briefing was attended by NHRI’s Board Members, officials and representatives of a number of local and international media outlets.

During the event, the NHRI Chairperson announced the launch of the ‘Human Rights Action Strategy’, which seeks to manage all matters related to human rights cases “as per a planned agenda and tangible outputs and within a proactive framework and careful prioritisation.”

“The next phase of our work is the most critical phase since our inauguration, in which our performance will be measured based on the results of our efforts in handling the different human rights files with responsibility and professionalism, Maqsoud Kruse said.

Kruse said that the ‘100-day plan’ was launched to establish a solid organisational infrastructure to pave the way for a sustainable roadmap to advance the human rights of individuals and communities in the UAE. “Throughout the past period, we have worked around the clock to put in place the necessary mechanisms and enablers towards the acceleration of the institutional readiness of the NHRI,” he added.

Kruse added that introductory meetings were also held with a number of international delegations and representatives from diplomatic missions in the country. NHRI has also participated in various human rights-related activities inside and outside the country and worked on building bridges of communication and establishing a network of strategic relationships.

Highlighting NHRI’s activities in the next phase, Kruse said NHRI will launch various interactive services for the public. In the next three months, it will launch a service for receiving complaints both from within and outside the country from all individuals, including citizens, residents and visitors; a service that provides individuals information on any human rights abuse or violation witnessed; a service for submitting suggestions, proposals and ideas for developing human rights in the country; and services that facilitates submission of inquiries or questions to NHRI.

In addition, Kruse said NHRI has launched its official website and social media accounts to provide a channel to interact with the public as well as promote a culture of human rights through awareness campaigns.

The National Human Rights Institution also announced plans to designate a toll-free number and launch a call centre in the next three months to facilitate further communication and interaction with the public. The call centre will receive complaints, share information and receive suggestions and inquiries.

Kruse also stated that NHRI offers opportunities for professionals in the field of human rights or other relevant specialties to join its team. Those interested in applying can register on the ‘Join Us’ webpage on NHRI’s website https://www.nhriuae.com/en, he said.

Concluding the briefing, Kruse thanked the exceptional efforts of NHRI’s leadership team, including the Deputy Chairperson, Board of Trustees, Chairpersons of the permanent and temporary committees, and the Secretary General, as well as all its media partners, including the Dubai Press Club.