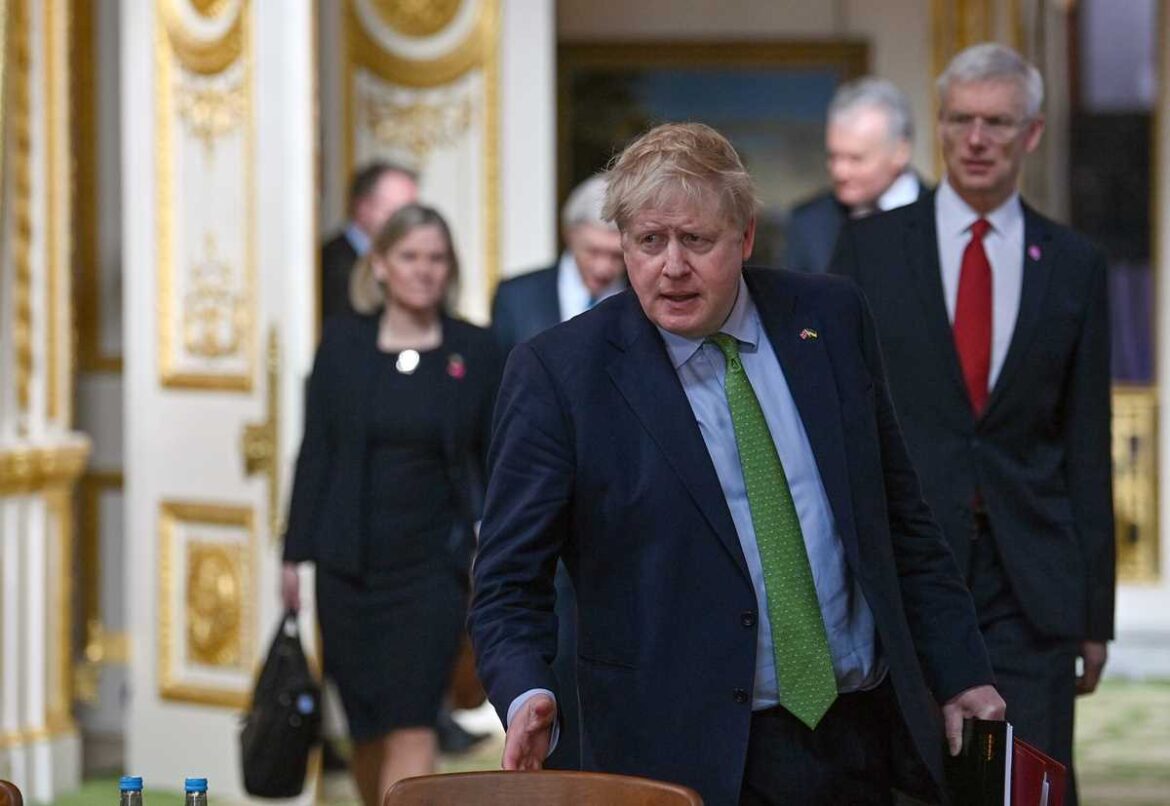 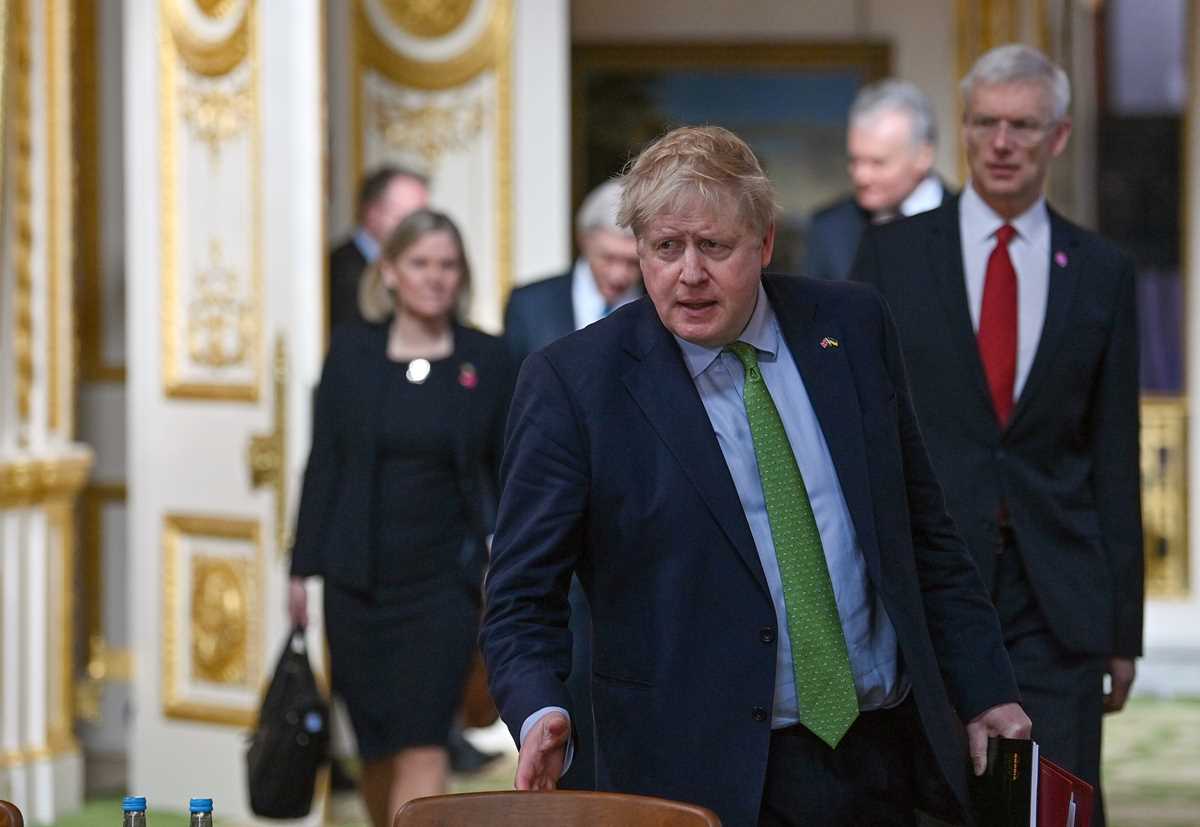 British Prime Minister Boris Johnson arrives for a meeting of the leaders of the the Joint Expeditionary Force (JEF), a coalition of 10 states focused on security in northern Europe, in London, Tuesday, March 15, 2022. (Justin Tallis/Pool Photo via AP)

British Prime Minister Boris Johnson is visiting Saudi Arabia and the United Arab Emirates on Wednesday as part of his efforts to press for increased oil production from the Gulf states to reduce dependence on Russian energy.

In a statement released by his office Tuesday, Johnson called Saudi Arabia and the UAE “key international partners” in his bid to wean the West off Russian oil and gas, improve energy security and coordinate action against Russia’s invasion of Ukraine.

The controversial visit has sparked an outcry of protest from U.K. lawmakers and rights groups, coming just days after Saudi Arabia said it executed 81 people in the largest known mass execution in the kingdom’s modern history.

“The U.K. is building an international coalition to deal with the new reality we face. The world must wean itself off Russian hydrocarbons and starve Putin’s addiction to oil and gas,” Johnson said in the statement. “Saudi Arabia and the United Arab Emirates are key international partners in that effort.”

Johnson is also seeking to boost Saudi investment in the U.K.’s renewable energy sector. During the trip, Saudi Arabia’s Alfanar group is expected to confirm a new 1 billion pound ($1.3 billion) investment in a sustainable aviation fuel project in northern England.

Ahead of the trip, Johnson said Western leaders made a “terrible mistake” by letting Putin “get away with” annexing Crimea from Ukraine in 2014. He wrote in the Daily Telegraph that Western dependence on Russian energy supplies had emboldened Putin’s invasion of Ukraine.

This guide will help you identify and execute an options trading strategy that fits your specific needs and risk profile.

Take your trading to the next level with the Options Strategy Guide.

“The world cannot be subject to this continuous blackmail,” Johnson wrote. “As long as the West is economically dependent on Putin, he will do all he can to exploit that dependence.”

But many U.K. lawmakers, including those in Johnson’s own Conservative party, questioned the decision to turn to Saudi Arabia, citing the recent mass execution and the kingdom’s human rights record.

Defending his trip, Johnson told reporters in London that “if we are going to stand up to Putin’s bullying,” it will be necessary to talk to other energy producers.

His spokesman said Johnson will raise the issue of the executions with the government in Riyadh during his visit.

Johnson’s government announced last week that the U.K. will phase out the import of Russian oil and oil products by the end of the year. But the U.K. is much less reliant on Russia fuel than its European allies, taking about 3% of its gas from Russia, Johnson said.

Saudi Arabia and the United Arab Emirates are top OPEC oil producers and have the spare capacity to pump more oil, but have given no indication of an imminent change in their oil production policy despite rising energy prices due to the Russian war on Ukraine.

Both have so far stuck with Russia and the OPEC+ agreement that was set into motion during the height of the COVID-19 pandemic to lift oil prices. The group, consisting of the Organization of the Petroleum Exporting Countries and its allies led by Russia and Saudi Arabia, calls for a gradual monthly release of more oil onto the market. But the agreement has been in place since well before Russia’s war in Ukraine drove up oil prices to their highest in years.

Follow all AP stories on Russia’s war on Ukraine at https://apnews.com/hub/russia-ukraine.

The manufacturing industry was one of the hardest hits in 2020. In the initial months of the coronavirus pandemic, many companies were forced to shutter operations. However, opportunistic investors kept their eye on several of these companies as recovery stocks. And at the beginning of 2021, the emergence of several vaccines allowed businesses to reopen.  Not surprisingly, manufacturing stocks were among the biggest winners.

But where are these stocks headed in 2022? In December, American manufacturers reported their slowest pace of growth in 11 months. A closely followed index of U.S.-based manufacturers dropped to 58.7% in the final month of 2021. This was slightly lower than the 61.1% in November according to the Institute for Supply Management.

Still, any number of above 50% signals expansion. And the number is only slightly below the 60% level that signifies exceptional growth.

Ironically, it’s the virus that continues to provide a headwind. Supply chains are unwinding but not nearly fast enough to prevent material shortages. The controversy surrounding vaccine mandates is causing labor shortages.

However, there’s a strong likelihood that manufacturing stocks will have a strong year in 2022. And even if they don’t, many of these stocks pay a reliable dividend. That’s why we’ve put together this special presentation on the manufacturing stocks that will overcome current difficulties.

View the “7 Manufacturing Stocks That Will Overcome Current Difficulties”.