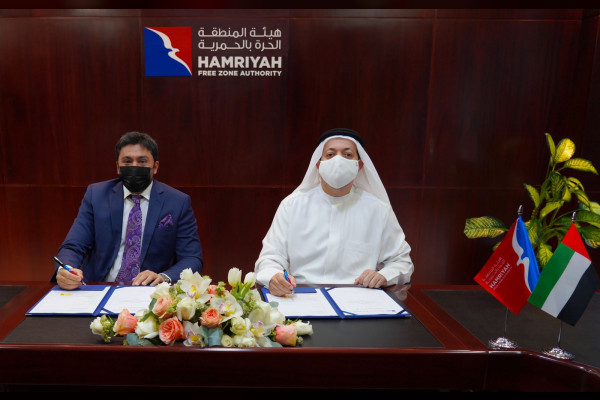 Under the new MoU, Valor International FZC will invest another AED77 million to build a multifunctional mini refinery over 193,750 sq. ft leased from the free zone. The new facility will have an estimated production capacity of 10,000 barrels per day and be designed to refine multiple commodities such as Crude Oil, Fuel oil, Gasoil, Naphtha among others.

With the new expansion plans, the total value of Valor’s investments in the free zone will reach close to AED200 million. This comes in line with its strategic plans to expand its regional and global presence from its headquarters in the Emirate of Sharjah.

The agreement was signed by Saud Salem Al Mazrouei, Director of the Hamriyah Free Zone Authority, and Nima Niknejad, Managing Director of Valor International FZC, at the HFZA headquarters in the presence of senior officials from both sides.

“Valor’s expansion plan is a significant step in the right direction. In addition to enhancing the growth of oil trade between manufacturers and users, the new facility will help the company better meet the increasing demand for energy and oil derivatives, considering the rapid economic growth witnessed by the Emirate of Sharjah,” Al Mazrouei said.

Nima Niknejad expressed his happiness at the new step taken by Valor, emphasising that it was driven by the unique facilities and exceptional support provided by the free zone to all investors. “We had such a great experience with the HFZA since our incorporation in 2019,” Niknejad said.

“The new plant will be dedicated to refining many commodities such as fuel oil, gasoil, naphtha, and kerosene for local and global use. Other than the domestic UAE markets our target market includes India, the Far East, and some African Nations.”

“We are currently exporting to over 10 countries around the world and we are growing daily. We have close to 40 people working at our terminal and we estimate that within a year we will have another 30 to 40 employees for the plant and around 10 more to our administration and trading teams,” Niknejad added.