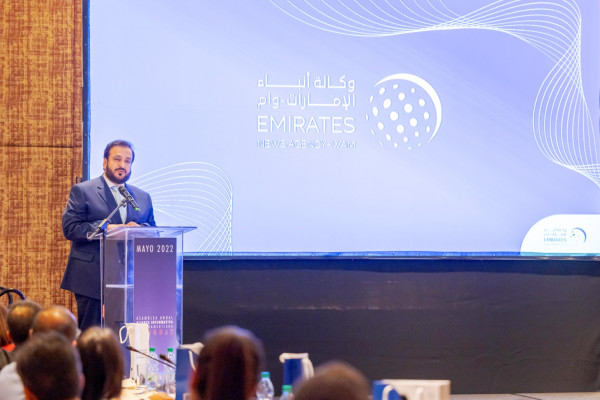 MONTEVIDEO, 7th May, 2022 (WAM) — A delegation from the Emirates News Agency (WAM) has participated in the annual conference of the Latin American Information Alliance (AIL), which was held in Montevideo, Uruguay.

The WAM delegation, headed by Mohammed Jalal Al Rayssi, Director-General of WAM, attended alongside a number of officials and media leaders from the member countries of the AIL, which includes 22 television networks in the Latin America and Caribbean (LATAM) region.

In his speech during the conference, Al Rayssi affirmed that the UAE, with the support of its wise leadership, is looking forward to proceed with its journey into fifty new years of achievement and leadership, highlighting its eagerness to partner with friendly countries, driven by its belief that fruitful and creative cooperation forms the foundation of a more prosperous and sustainable future.

WAM’s presence at the AIL’s annual meeting spotlights this vision, as well as the importance of the alliance’s role in promoting joint cooperation, exchanging experiences, and developing media work in AIL member states, he noted.

“Navigating through the challenges forced upon the world during the past few years, we managed to gain several insights, and we foresaw promising opportunities to collaborate and forge partnerships to shape the future. With the media sector becoming a mainstay of development plans in all countries, we are keen to work together to achieve further development and progress across vital sector,” the Director-General explained.

Al Rayssi further said that Expo 2020 Dubai, which the UAE ensured to make a success through deliberate organisation, served as an inspiring platform that enabled WAM to build productive partnerships with numerous media entities, underscoring the Agency’s eagerness to enhance cooperation and implement joint programmes that benefit all constituents of the media sector.

He added, “We are pleased to be partners of the Latin American Information Alliance, a partnership came to be in October last year with the signing of a cooperation agreement between us, and we look forward to continuing our joint work at various levels.”

Al Rayssi invited all AIL member countries to participate in the Global Media Congress, which will be held in Abu Dhabi next November and aims at shaping the future of the media sector regionally and globally. The event will examine several topics, including digital communication, the impact of artificial intelligence on contemporary media, and the integration of advanced technology and innovation into the media sector.

Moreover, the WAM Director-General showcased the outputs of WAM’s bilateral agreements signed with a number of media institutions in Latin America during Expo 2020 Dubai.

As part of its participation in the conference, Brazil’s Banderas Media Group highlighted the cooperation agreement it recently signed with the Emirates News Agency and its role in enhancing news exchange between the two sides.

Musk reveals: These are the secret partners in the acquisition of Twitter