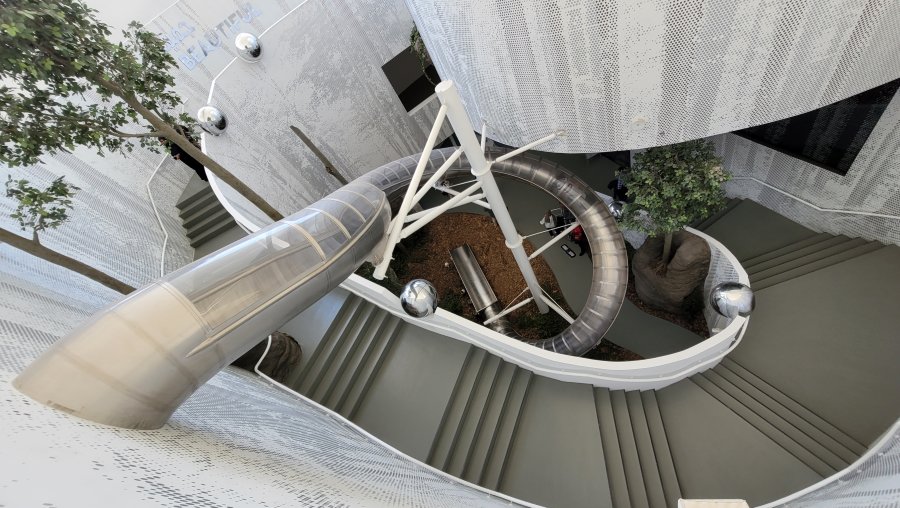 Josef Wiegand, a family-owned manufacturer of toboggan runs, rail-mounted toboggans and stainless steel dry slides, has revealed its fun addition to Expo 2020 Dubai, located in the centre of a European pavilion.

The huge slide provides a slight hint as to “Schueberfouer”, a Luxembourgish traditional fair custom that dates back as far as the Middle Ages.

Found at the climax of the spectacular pavilion, Wiegand’s installation provides a fun way to conclude the experience in the Luxembourg pavilion.

Starting at the top floor, the slide provides guests with a fun and swift journey back to the ground floor’s green atrium. The dry slide was expertly manufactured by Josef Wiegand GmbH in Rasdorfa, a municipality of Hesse in Germany.

A taste of Luxembourg

This year’s expo theme is “Connecting Minds, Creating the Future”, which is explored with the three components of sustainability, mobility and opportunities.

One of a selection of pavilions, this year’s appearance marks the twenty-fourth appearance in a world exhibition for the Grand Duchy of Luxembourg, and the only country to feature a slide in its pavilion this year.

Catering for all the senses, the guest journey is also accompanied by a rousing Luxembourg Philharmonic Orchestra score, an aroma of the country’s lush woods, and fusion cuisine curated by Kim Kevin De Dood, a Michelin-starred chef.

Its theme of ‘Resourceful Luxembourg’ showcases ways in which the country is fulfilling its commitment to distribute its resources in a way that helps create a better world for all.

Due in part to the unique slide, the Luxembourg Pavilion has been named as a “Top 5 must-see attraction” at the Expo by a number of different reviewers.

The slide and pavilion will continue to be available to guests in Dubai until the end of this month. Expo 2020 Dubai concludes on 31 March 2022.

Wiegand recently announced one of its slides will form the centrepiece of Harz Tower, a new landmark project providing views over a German national park and the surrounding countryside.

WAM delegation briefed on latest technologies at MWC 2022 in Barcelona